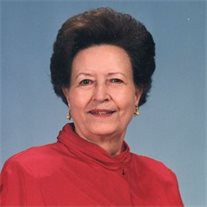 Betty Ruth Johnson Durand, 79. of Ashdown, AR died Tuesday February 7, 2012, at her home. Mrs. Durand was born June 3, 1932 in Ashdown, AR. She was a homemaker and a member of Oak Grove Baptist Church near Ashdown, Arkansas. Mrs. Durand gradusted from Ashdown High School in 1950 and moved to Pasedena, Texas. She attended Massey Business College in Houston, Texas and was employed by Diamond Alkali of Pasedena, Texas for a number of years. She and her husband made their home in Pasedena, Texas until 1985 when they retired to their farm outside of Ashdown, Arkansas. She was preceded in death by her husband, Johnnie Wilford Durand; her parents, Buck and Florence Johnson, her brother, Johnny Johnson and her sister, Irene Dorflinger. Survivors include; one son and daughter-in-law, Johnathan and Kim Durand of Ashdown, AR; two daughters and son-in-laws, Judy and Phillip Ferris of Houston, Texas and Suzanne and Glen Reed of Ashdown, AR; four grandchildren Phillip Michael and Heath Ferris of Houston , Texas and Jay and Wyatt Durand of Ashdown; three step-grandchildren, Joe and Darrell Reed of Ashdown and Damond Reed of Aubrey, Texas; six step-great-grandchildren and a number of other relatives. Services will be 2 pm Friday February 10, 2012 at Oak Grove Baptist Church with Brother Jay Baker officiating. Burial will be at Oak Hill Cemetery near Ashdown, AR. Arrangements will be under the direction of Madden Funeral Home of Ashdown, Arkansas. Visitation will be 6 pm to 8 pm Thursday February 9, 2012 at Madden Funeral home, Ashdown,AR. Online registration at: maddenfuneralservice.com

The family of Betty Durand created this Life Tributes page to make it easy to share your memories.

Send flowers to the Durand family.