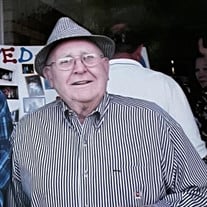 Billy Wayne Adkison was born April 4, 1933 to Jinkens Theodore Adkison and Lou Alice Combs Adkison in Ashdown, AR. He became a military veteran having served in the Army during the Korean War. His first job driving a truck was working for Foreman Cement Company. Then he bought his first truck and leased it to A&P Truck Lines as an independent owner/operator. He made many trucking friends as he drove in every state of the United States. He continued driving trucks until age 73 when he hung up his diddy bag to go home. His wife, Kathy Walraven Adkison, made some awfully good fried chicken and biscuits and gravy and it appealed to him more than adding more miles on the road. Billy Wayne and Kathy were married for over 52 years before she died in 2017. Billy passed away on Saturday, May 14, 2022 at 4 p.m. surrounded by his loving family at his residence. Preceeding him in death were his parents, his wife Kathy, a brother Charles Adkison and a sister and brother-in-law Grover and Betty Porter. His survivors include two daughters; Shelia Annette (Mike) Brown of Texarkana, AR and Karon Renee (Joe) Davis of Ashdown, AR; one brother Teddy (Pat) Adkison of Lantana, TX and two sisters; Annette (Pat) Maddox of Tyler, TX and Pat (Don) Washington of Ashdown, AR. Three grandsons who loved their grandfather more than words can express are Cody Michael Brown of Longview, TX, Tyler Andrew Brown of Texarkana, AR, and Jacob Daniel Register of Jacksonville, AR. Other survivors include a special niece, Meredith Porter, and a host of other nieces and nephews and numerous friends. The family would like to express their love and deep appreciation to very special friends and caregivers, Tina Darden, Barbara Penny and Billy Waynes sister-in-law, Wynell Choate. Visitation will be Wednesday, May 18, 2022 at 10 a.m. one hour prior to his funeral service at 11 a.m. at Madden Funeral Home in Ashdown, AR. The officiant will be James Brinkley. Interment will follow at Ashdown Cemetery.

Billy Wayne Adkison was born April 4, 1933 to Jinkens Theodore Adkison and Lou Alice Combs Adkison in Ashdown, AR. He became a military veteran having served in the Army during the Korean War. His first job driving a truck was working for... View Obituary & Service Information

The family of Billy Wayne Adkison created this Life Tributes page to make it easy to share your memories.

Send flowers to the Adkison family.