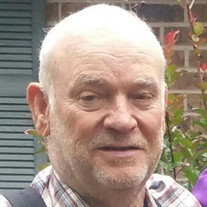 Billy Bob Blankenship, 77, left his earthly home on March 22, 2021 at St. Michael’s Hospital in Texarkana, TX to arrive at his heavenly home. He was born August 8, 1943 in Prescott, AR to parents Willie Lee Blankenship and Bursie Mae Vernon Blankenship. Billy worked in the Ashdown Paper Mill business for 47 years retiring at the Domtar facility. He was a Vietnam Veteran having served in the Army during that conflict. Favorite pastimes were hunting and fishing but most important was the time he spent with his grandchildren, whether around home or at a sporting event. He was predeceased by his parents, one sister Willie Mae Arnold, three brothers, Robert Blankenship, Richard Blankenship and Donnie Prewitt and a granddaughter Carley Brooke Blankenship. Survivors include his wife of 53 years, Diane Blankenship of Ashdown, AR; son Chad (Jody) Blankenship of Ashdown, AR, daughter Angela (Paul) Copeland of Texarkana, TX and a brother Jimmy Blankenship of Jacksonville, AR. The grandchildren who loved him so are Paige Copeland, Chase Copeland, Caleb Blankenship, Camryn Blankenship, Chad (Hannah) Copeland, Ashley (David) Jalufka and three great-grandchildren Paisley Copeland, Rhett Copeland and Jaxon Jalufka. Visitation will be Thursday, March 25, 2021 at Madden Funeral Home in Ashdown, AR from 12:30 to 1:30 pm being one hour prior to the graveside service scheduled for 2 p.m. at Ashdown Memorial Gardens. The officiant is Butch Riddle.

The family of Billy Bob Blankenship created this Life Tributes page to make it easy to share your memories.

Send flowers to the Blankenship family.