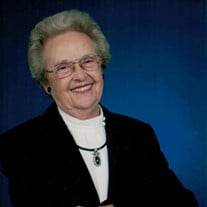 Carolyn Wood Thrash passed away peacefully surrounded by loved ones on March 17, 2022 at the age of 87. Carolyn was born September 22, 1934 in Texarkana, AR to parents Millard T. Wood and Elizabeth Louise “Rags” Wood. She was a lifelong resident of Ashdown, AR and was a long-time member of The First Baptist Church of Ashdown. She graduated high school at Ashdown and continued her education by enrolling at Henderson University. After receiving her degree at Henderson University, she then got her master’s degree at East Texas at Commerce which is now named Texas A&M at Commerce. During her education she developed a deep friendship with her coach, Helen Parker. Carolyn’s first job was as a coach at Foreman. Next, she worked at Texas High School where she established the Texas High Steppers. Then she crossed the state line and worked at Arkansas High. Her last educational endeavor was at Ashdown High School where she served as a counselor. She retired after 44 years in Education where she touched the lives of many students. She helped many students secure scholarships and allowed them to further their careers. Carolyn married her high school sweetheart, Rodney Thrash, in June of 1954. Together they built a beautiful life full of love and family. She always had a smile on her face and she also had a great sense of humor. She loved joking with her grandchildren. You never knew what was next because she was constantly lining them out. The long friendship she had with Helen Parker was put to the test a few times when their teams had to play each other. She was preceded in death by her parents, Millard and “Rags” Wood and one son, Rodney Wood Thrash, “lit’l Rod”. Survivors include her husband Rodney A. Thrash, one daughter and son-in-law, Tammi Thrash (Donald) Smith; one granddaughter, Audrey Thrash (Phillip) Seib; Two grandsons Cody (Samantha) Thrash and Austin (Tracee) Thrash; along with seven great-grandchildren; Carter Thrash, Heidi Thrash, Ruby Seib, Walker Thrash, Eliza Seib, JP Thrash and Millie Seib. Other survivors include brother-in-law Jimmy (Pat) Thrash, two nephews, Brent (Kathy) Thrash and Layne (Heather) Thrash as well as her life-long friend, Helen Parker. Mrs. Thrash is also survived by her cousins and many other friends. Pallbearers are Carter Thrash, Cody Thrash, Austin Thrash, Phillip Seib, Donald Smith and Brent Thrash. Honorary Pallbearers are Layne Thrash, Johnny Finley and Johnny Smith. Visitation will be Tuesday night, March 22, 2022 from 6:00 pm to 8:00 pm at Madden Funeral Home in Ashdown. Funeral Services are Wednesday, March 23, 2022 at 10:00 a.m. at First Baptist Church in Ashdown with John Ford, presiding. Interment will follow at Ashdown Cemetery. Memorials may be sent to Shriners Hospital for Children, 2900 Rocky Point, Tampa, FL 33607-1460 or to your favorite charity. Online condolences can be made at [email protected]

Carolyn Wood Thrash passed away peacefully surrounded by loved ones on March 17, 2022 at the age of 87. Carolyn was born September 22, 1934 in Texarkana, AR to parents Millard T. Wood and Elizabeth Louise &#8220;Rags&#8221; Wood. She was... View Obituary & Service Information

The family of Carolyn Wood Thrash created this Life Tributes page to make it easy to share your memories.

Send flowers to the Thrash family.