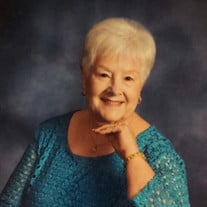 Diane Brown McLarty of Ashdown, died peacefully at home on Wednesday morning, September 29th with Carroll and Jackie at her side. Diane was 77 years young, she was born on November 19, 1943 in Ashdown, Arkansas. She fought a brave and uncomplaining battle with Leukemia for over a year. Diane was preceded in death by a daughter Juanita Renee, her parents, Ted and Matilda Brown, four brothers, Mannie, Harold, Billy Ray ( Cotton ), and Tony. She is survived by her high school sweetheart of 2 years and husband of 60 years minus 2 months Carroll, daughter Jacqueline Atkins, grandchildren, Justin and wife Christy Kendrick, Lindsay Nelson and her special friend, Andy Janssen, Jordan and husband Garrett Stoner, Erica and her husband USMS 1st Lieutenant Johnny Alday, Jackson Sanders, great grandchildren Kylie and Eleanor Kendrick and Makenzie Harris, Brothers Robbie and wife Faustine Brown and Danny Brown ,Son In Law / Friend, Jodie Sanders plus many loved, caring nieces and nephews. Diane was active in the community by being a Past-President of the PEO, a member of the Two Rivers Museum and Art Council, she was one of the founding members & officers of the Ashdown High School Alumni Association where she was Treasurer since its beginning until illness forced her to retire. She handled all tickets and seating arrangements at every banquet. She was a devote Christian and member of the First United Methodist Church. Diane was an avid reader, a very skilled Bridge player who even taught the game to many beginners, enjoyed Mah Jongg and became an excellent Phase 10 player sometimes playing for hours at a time with youngest grandson Jackson during his visits. In her healthier years she was a good tennis and golf player with few days going by that she was not on the tennis courts or golf course or both. She loved to travel and enjoyed many cruises, trips abroad and plus a lot of domestic trips. She took pride in being “Nana” showering the grandkids with love and spoiling them as much as possible which was returned to her with a special bond and love. Visitation will be 5 – 7 PM on Friday October 1st at Madden Funeral Home in Ashdown. Services will be held at The First United Methodist Church at 2:00 PM Saturday, October 2nd under the direction of Madden Funeral Home with Brother Jim Cross officiating. Burial will follow at Oak Hill Cemetery. Memorials may be made to the Oak Hill Cemetery Association 649 E. North St., Ashdown, Ar. 71822 or the First United Methodist Church, Ashdown

Diane Brown McLarty of Ashdown, died peacefully at home on Wednesday morning, September 29th with Carroll and Jackie at her side. Diane was 77 years young, she was born on November 19, 1943 in Ashdown, Arkansas. She fought a brave and uncomplaining... View Obituary & Service Information

The family of Diane Brown McLarty created this Life Tributes page to make it easy to share your memories.

Send flowers to the McLarty family.