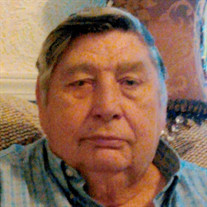 Doyle Lee Lansdell, Sr., 69, of Foreman, Arkansas left this earth Saturday, August 18, 2018 in Texarkana, Texas, after a lengthy illness. Mr. Lansdell was born in Foreman, AR on March 17, 1949 to Iva and Luther Lansdell. He was a retired carpenter... View Obituary & Service Information

The family of Doyle Lee Lansdell Sr. created this Life Tributes page to make it easy to share your memories.

Send flowers to the Lansdell family.