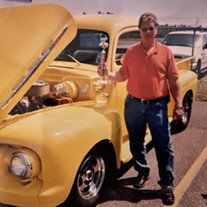 Ernest “Ernie” Allen Rehkopf, 71, of Texarkana, TX went home to be with Jesus on March 29, 2021. Ernie, son of Henry Ernest and Gladys Mattie (Braswell) Rehkopf, was born in Houston, Texas on April 1, 1949. Ernie lived life to the fullest enjoying time with his family and friends. He was known by his kids as Daddy and grandkids as Pop. He graduated in 1967 from Texas High School in Texarkana, TX. He married the love of his life Kathie (Rose) Rehkopf in 1970 and moved to Denton, TX where he attended the University of North Texas pursuing an art degree. Ernie and Kathie moved back to Texarkana and settled down making Texarkana their forever home. Ernie was a talented baseball player playing as a catcher during high school and well into his early thirties. He was a Christian, and an active member of First Baptist Church Moores Lane Texarkana, Texas. Daddy loved Jesus and was quick to share Him with those he met. He often made wooden carved hearts that he would wood burn or write in sharpie Believe on one side and a cross on the other. His business card was made out of wood and the bottom of a wooden shoe. He had his contact information on one side and wrote out the verse John 3:16 on the other. He also included “from my soul to yours”. Ernie spent his career in sales, maintenance and transportation working for companies including Majestic, Omega Saw and Tool, and The Texarkana Gazette. He retired from Cornerstone Retirement Community in 2012. After retirement, he began making custom jewelry. One time, while attending an arts and crafts show, he sold one of his rings straight off his daughter’s finger. He also enjoyed tying flies for fly fishing. Whenever possible, he loved spending time with family often traveling for long weekends or enjoying time together at the beach. Ernie was a Master Woodcarver, a talented artist and a jack of all trades. He shared his talent with those he loved as well as people he met out and about often making something meaningful for them to keep. He was known for his wood carvings, sharpening kits, paintings, ice sculptures, wind chimes, and jewelry. He also enjoyed spending time fishing with dear friends and family. He had a love for the classics: classic cars, street rods, and low riding vintage Ford trucks. He owned just about every make and model he could find often saying to Kathie, “Yes Dear, I promise this is the last one”. His kids often joked that they weren’t sure what car to look for in the after school pickup line. Some of his favorites included his 1951 Ford F100 yellow truck (he named Ducky Lou), several Volkswagen buses and bugs and even a single-cab, a 1956 Ford truck… the list goes on and on. Daddy is the only guy I know that could sell a car only to buy it back and sell it again. He deeply loved his family. His favorite place to be was by his wife’s side. Together they had lunch dates almost daily for the better part of 30 years. They also enjoyed trips to Shreveport for lunch and shopping as well as trips to Branson for long weekends with family. Catfish Friday’s at the Fish Bowl were a staple in the Rehkopf house. Ernie especially loved his wife’s cooking, she made sure there was always a homemade cake or pie around to satisfy his sweet tooth. Ernie is preceded in death by his parents, his in-laws Arthur Andrew “Buddy” and Betty Jean Rose, and nephew, Matthew Michael Rose. He is survived by his loving wife of 50 years, Kathie Lynn (Rose) Rehkopf of Texarkana, two daughters Tiffany (Jason) Robinette of Conway, AR and Amanda (Shad) Thompson of Olathe, KS, one son Anthony Michael Rehkopf of Texarkana, TX, six grandchildren Emily Robinette, Hunter Robinette, Ruby Rehkopf, Kaylee Thompson, Macy Thompson and Steele Thompson, his beloved dog Leo, a brother-in-law Mike (Joanne) Rose of Leary, TX, a sister-in-law Lisa (Tony) Tirrito of Texarkana, AR , a host of nieces and nephews, and many dear friends. A Celebration of Life will be held Wednesday, April 7, 2021 at 10:00 am at First Baptist Church Moores Lane, Texarkana, Texas in the Atrium officiated by Pastor Jeff Schreve. Visitation immediately following service. A private burial will be held at Hillcrest Cemetery later in the day. Arrangements are under the direction of Madden Funeral Home, Ashdown, AR. In lieu of flowers, the family requests that donations be made to St. Jude’s Children’s Hospital. A special thanks to the wonderful staff of The Villa of Texarkana and Heritage Hospice for the love and care they showed Ernie in his final days.

The family of Ernest Allen Rehkopf created this Life Tributes page to make it easy to share your memories.

Send flowers to the Rehkopf family.