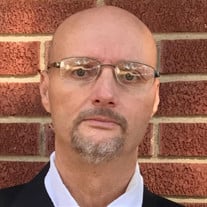 Freddy Leon Carver, 48, of Foreman, Arkansas, went to be with his Lord and Savior after a long battle with pancreatic cancer on July 25, 2018 at his home surrounded by his family. Freddy was born in DeQueen, Arkansas on October 18, 1969, to the late Clarence Carver and Evelyn Lansdell Carver. Freddy had a business degree and was retired from RRAD. His hobbies were gardening, fishing and hunting. Freddy is preceded in death by his father, Clarence Carver, sister Edna Russell, and nephew Larry Russell. Freddy married the love of his life, Candice Denee’ Knighten Carver, on January 21, 1995. They shared 23 years of life together. Freddy and Candice have two children, Adam Neil Carver of Foreman, Arkansas and Lorin Michelle Carver of Texarkana, Texas, one granddaughter, Brooklyn Rae Iverson of Ashdown, Arkansas, his mother, Evelyn Carver of Foreman, Arkansas, three brothers, Troy (Patsy) Carver, David (Angie) Carver both of Foreman, Arkansas, Roy (Cathy) Carver of Bryant, Arkansas, three sisters, Marty (Tim) Sharp of Henderson, Tennessee, Wanda (late Nolen) Reed, and Sheila (Johnny) Setliff and a brother-in-law, Guy Russell all of Ashdown, Arkansas. He has numerous nieces and nephews. He is also survived by his father and mother- in-law, Charles and Jenise Knighten and sister and brother-in-law Melinda and Todd Carrell of Foreman, Arkansas. The memorial service will be Friday, July 27, 2018 at First Southern Baptist Church of Crossroads at 10:00, under the officiation of Brother Roy Conaster. The funeral is under the direction of Madden Funeral Home. The visitation will be located at Madden Funeral Home in Foreman, Arkansas, on Thursday, July 26, 2018 from 6:00 – 8:00. Freddy will be laid to rest at Marvin Cemetery in Wallace, Arkansas, with his father. Freddy was a man of God with a strong faith. He knew without a shadow of doubt that he would be joining his Father in heaven. He said multiple times that he wouldn’t change the fact that he had cancer and that it cut his life short. Yes, he would have loved to have spent more time on Earth with his family and friends but he was able to experience the most precious gift of all; a strong relationship with God. His final thoughts to his family and friends are: please don’t cry for me. Know that I am in a much better place. I am pain free, living in my new body in the Kingdom of God. I ask that if you do not know the Lord as your personal Savior please accept Jesus in your heart and live a life that God wants you to live, so that we will meet again one day. Keep your faith and never doubt God’s reasoning for taking me home. Then spake Jesus again unto them, saying, I am the light: of the world; he that followeth me shall not walk in darkness, but shall have the light of life. John 8:12 Verly, verly, I say unto you, He that heareth my word, and believeth on him that sent me, hath everlasting life, and shall not come into condemnation; but passed from death unto life. John 5:24

Freddy Leon Carver, 48, of Foreman, Arkansas, went to be with his Lord and Savior after a long battle with pancreatic cancer on July 25, 2018 at his home surrounded by his family. Freddy was born in DeQueen, Arkansas on October 18, 1969, to... View Obituary & Service Information

The family of Freddy Leon Carver created this Life Tributes page to make it easy to share your memories.

Freddy Leon Carver, 48, of Foreman, Arkansas, went to be with...

Send flowers to the Carver family.