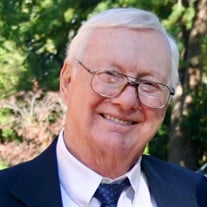 Gene Lewis, 88, of Ashdown, Arkansas passed away Friday, December 3, 2021 at St. Michael’s Hospital in Texarkana, Texas. He was born February 1, 1933 in Longview, Texas to Ralph Eugene Lewis and Katherine Bates Lewis. Gene was a high school coach in public schools. After retiring from coaching, he later became a rancher. He was a member of Wade’s Chapel United Methodist Church. Gene was also a veteran, having served in the Army. He was preceded in death by a brother, Alan Bates Lewis. Survivors include his wife of 65 years, Mary Frances Sample Lewis; one son and daughter in-law, Gene and Jill Lewis of Denver, Colorado; and three daughters and sons in-law, Kathy and Ali Rashidi of The Colony, Texas, Cindy Morris of Ashdown, Arkansas, and Jenny and Iain Gillott of Austin, Texas. Other survivors are one brother and sister in-law, Daniel and Jenny Lewis of College Station, Texas; ten grandchildren; and four great grandchildren. A memorial service will be held at 3 p.m. on Saturday, December 11, 2021 at Wade’s Chapel United Methodist Church with Reverend Jim Cross officiating. Memorials may be made to Wade’s Chapel, 145 East Commerce, Ashdown, Arkansas 71822.

The family of Gene Granvil Lewis created this Life Tributes page to make it easy to share your memories.

Send flowers to the Lewis family.