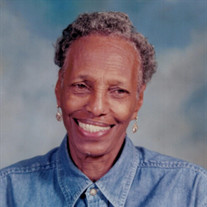 Helen Marie Dixon, 95, of Foreman, Arkansas went home to be with the Lord on Monday, January 27, 2020. Helen was born on December 4, 1924 in Hempstead County, AR to Henry and Laura (Suttles) Beard. She accepted Christ as her savior at an early age and dedicated her life to serving others. She married her sweetheart, Ulysses, on June 26, 1943 and to this union, nine children were born. She and Ulysses made their home in Foreman, Arkansas, where she lived until her death. She was an active member of St. Matthew Baptist Church in Foreman. She was preceded in death by her parents, her husband, Ulysses S. Dixon, her sisters, Lenora, Cornelia, Bernice and Hazel and two of her sons, Michael Wayne Dixon and Ronald Charles Dixon. To describe her as one-of-a-kind would be an understatement. Helen lived a life that challenged the status quo. She believed in doing the right thing, even if it seemed impossible. She and Ulysses strived to provide a better life for their family and community, allowing their young children to be among the first to integrate Foreman School District. She dedicated her life to making life better for all people. For 41 years, Helen served on the Foreman City Council, fighting for her constituents with passion and resiliency. She also served as a foster grandparent for Foreman Schools, participated in the local chapter of Kiwanis Club, of which she was elected the first African American president and contributed as a board member for a number of organizations. Helen leaves to cherish her memory seven children: Sheri (WH) Collins, Jaqueline (Troy) Wiseman, Kenneth Dixon, all of Foreman, Arkansas: Barbara (Mitch) Ware of Texarkana, Arkansas: Eugene (Royce) Dixon of Vernon, Texas: William (Paula) Dixon of Englewood, Florida; and Constance (Robert) Stitt of New Port Richey, Florida: two bonus sons: Anthony (Terry) Dixon of Rex, Georgia and Stanley Dixon of Chicago, Illinois; fourteen grandchildren, seventeen great-grandchildren, and a host of cousins, nieces, nephews, neighbors and friends.

Helen Marie Dixon, 95, of Foreman, Arkansas went home to be with the Lord on Monday, January 27, 2020. Helen was born on December 4, 1924 in Hempstead County, AR to Henry and Laura (Suttles) Beard. She accepted Christ as her savior at an early... View Obituary & Service Information

The family of Helen M. Dixon created this Life Tributes page to make it easy to share your memories.

Helen Marie Dixon, 95, of Foreman, Arkansas went home to be with...

Send flowers to the Dixon family.