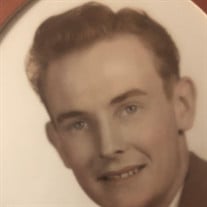 James Aubrey “Pappy” Hawthorne, 92, of Ashdown, AR passed away January 8, 2020 after a brief illness. He was a resident of Ashdown, AR for 52 years. He was born August 21, 1927 in Weston, Louisiana to the late Charles A. “Bud” and Genie Ethel Hawthorne. He is preceded in death by his parents, and three children, James Curtis Hawthorne, Charles David Hawthorne and Anthony Eugene Hawthorne. He served active duty in Germany in the United States Air Force during World War II. He was a member & greeter of Central Baptist Church of Ashdown and loved Sunday School and children. He graduated High School from Weston, LA where he was a star athlete in basketball then graduated from St. Louis Technical School / St. Louis, MO. He worked for Nekoosa Edwards when they started in 1968 and retired from Georgia Pacific in 1993. He loved retirement while hunting, fishing and camping with his lifetime dancing partner and the love of his life, JoAnn. Survivors include his wife of 69 years, JoAnn Hawthorne, one son and daughter-in-law, Joseph Stephen (Fonda) Hawthorne of Ashdown, AR, one daughter and son-in-law, Rita Anne ( Michael ) Runnels of Conover, NC, one brother, H. L. Hawthorne of Bourg, LA, one sister, Cloteal Melder of Milledgeville, GA, 8 grandchildren, 16 great-grandchildren and 2 great-great grandchildren. Visitation will be Friday, January 10, 2020 from 6-8p.m. at Central Baptist Church in Ashdown, AR. Services will be Saturday, January 11, 10a.m. at the church with Bro. Don Embry officiating. Interment will follow, Saturday, January 11 at Zion’s Rest Primitive Baptist Church Jackson Parish, Zion’s Rest Road; Hwy 812 Jonesboro, LA. In lieu of flowers, donations can be made to Central Baptist Church 261 Commerce Street Ashdown, AR 71822 for sound & media fund.

The family of James PAPPY Hawthorne created this Life Tributes page to make it easy to share your memories.

Send flowers to the Hawthorne family.