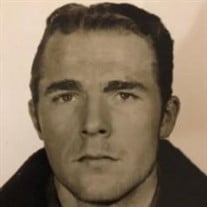 James Willis Ellis (J.W.) was born in Foreman, AR to Gene and Janie Ellis on March 9, 1928. J.W. grew up in Foreman and attended the old Foreman High School where he was a favorite among students and teachers alike. Throughout his life, he was known for his kindness and generosity towards others. Growing up in Foreman he rode his horse, Tony, about town, to school and to Church. He was a lifelong member of Sacred Heart Catholic Church. After graduation, JW joined the USAF. He served during WWII in the United States Air Force as a radio man. In 1949, he married Theresa Yoder and they were married for 54 years until her passing. After his discharge, he attended college in Stillwater, OK then returned to his hometown where he settled and raised his family. He was affectionately known as Granddaddy to his grandchildren who adored him. J. W. worked hard as a postal carrier for 30 years. His passion was a few cows and farming even during his postal career. After his retirement, J.W. continued farming with his sons for the next 38 years. Mostly self-taught, J.W. knew every insect and disease that could plague crops and he had exceptional veterinarian skills as well. Overlooking the crops even at age 93, he knew what needed to be done next. Since he was a small farmer, he still drove his tractors until age 91. He made the trek from Foreman to the farm almost every day from childhood until a few days before his passing with his children and Perry nearby. On August 27, 2021, J.W. passed on to meet Theresa and Dan and those who went before him. He is preceded in death by his beloved wife Theresa Ellis; parents; sisters Sallye Stiles, Jane Telford; brother Eugene Ellis and grandson James Daniel Young. Left to cherish his memory are his children: Sallye Young (Perry) of Foreman, Jay Ellis (Heidi) of Sherman TX, Gene Ellis (Sue) of New Boston TX, grandchildren: Cal Young, Justin Ellis, Tiffany Ellis, Betsy Ellis, Kenzie Ellis and Jordan Ellis: great grandchildren Kendyl Ellis , Carsye and J. D. Young, Riley and Jaxson Murphy; niece and nephews: Rebecca Epps, Ellis and Brad Telford. 2 Chronicles 26:10-He built towers in the wilderness and hewed many cisterns, for he had much livestock, both in the lowland and in the plain. He also had plowmen and vinedressers in the hill country and the fertile fields, for he loved the soil. Burial Services will be at Holy Cross Cemetery, Foreman AR on October 15, 2021 at 2:00 pm with Father William Burmester officiating.

James Willis Ellis (J.W.) was born in Foreman, AR to Gene and Janie Ellis on March 9, 1928. J.W. grew up in Foreman and attended the old Foreman High School where he was a favorite among students and teachers alike. Throughout his life, he was... View Obituary & Service Information

The family of James Willis (J.W.) Ellis created this Life Tributes page to make it easy to share your memories.

James Willis Ellis (J.W.) was born in Foreman, AR to Gene and...

Send flowers to the Ellis family.