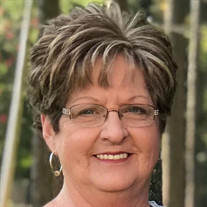 Janet Lynn Wrinkle, age 65, of Ashdown, AR, passed away Thursday, December 16, 2021. She is preceded in death by her mother, Jo Ann McElhannon, great niece, Betsy Ball and great niece, Meredith Ball. Janet is survived by her husband of 46 years, Terry Wrinkle; three sons, Tommy Wrinkle and wife, Camille, Jeff Wrinkle and wife, Katelyn, Jeremy Wrinkle and wife, Kristen; nine grandchildren, Emma, Caroline, Eli, Abigail, Ben, Aubrey, Duncan, Mac, and Ava, and honorary grandson, Blake Ritter. Janet is also survived by her father, Gerald McElhannon, her sister, Jeri Easterling and husband, Jack; nephew Jonathan Easterling and wife, Tasha; niece, Julie Ball, and husband, Clay; and great nieces and nephews, Parker, Addison, Baylor, Maddox, Tinslee, Ellie and Oaklynn. To say Janet was an involved mother and grandmother is an understatement. She lived for her grandchildren and rarely missed a game, a dance recital or a cheer competition, even when it meant driving several hours, or sitting in the rain. And if they wanted it, Nanny did her best to make sure they got it. That included manicures with the girls, shopping in Texarkana, and even the occasional inflatable slide in their backyard, just because one of the grandkids asked. Spoiling her grandbabies was her biggest joy, and family was everything. Sunday suppers at Nanny and Papa’s were a weekly event and attendance was mandatory. Next to her kids and grandkids, was her love for the many lifelong friendships she had. She spent countless summer days on the dock at Self Creek, relaxing with friends, and many fun-filled trips with her OLG’s (Old Ladies Gang). But her day wasn’t complete unless she had talked to her best friend, Nancy, usually starting with a phone call at 7am, followed by several more throughout the day. Janet was a graduate of Ashdown High School and a lifelong Panther fan. She served on the Ashdown School Board, where she was an advocate of public education and champion for all school children in the community. Janet was a devoted member of the Ashdown United Methodist Church, and had a great love for her church and for her pastor, Brother Jim Cross, and his family. Janet had an impact on the lives of her family, and lives of many others, as a second mom and nanny, and she leaves a legacy of love to all those who knew and loved her. Visitation will be held 6:00 – 8:00 PM, Sunday, December 19, at Madden Funeral Home. The Funeral Service will be held at 10:00 AM, Monday, December 20th, at Ashdown First United Methodist Church. In lieu of flowers, memorial donations can be made to Ashdown United Methodist Church, 145 E Commerce St, Ashdown, AR 71822.

The family of Mrs. Janet Lynn Wrinkle created this Life Tributes page to make it easy to share your memories.

Send flowers to the Wrinkle family.