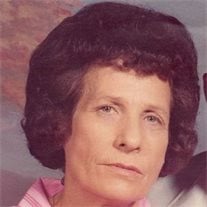 Lois Miller, 85, of Ashdown, AR passed away peacefully in the morning hours of Friday August 24, 2012. Her family ad friends had enjoyed visiting with her and showering her with their love and devotion. Mrs. Miller was born to James Clinton... View Obituary & Service Information

The family of Lois Miller created this Life Tributes page to make it easy to share your memories.

Lois Miller, 85, of Ashdown, AR passed away peacefully in the...

Send flowers to the Miller family.