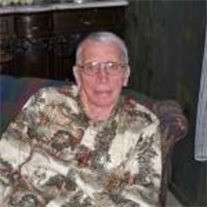 Norman Fred Dudley, 76 ,went home to be with his Lord and Savior Jesus Christ February 15, 2012. Born in Ashdown, AR November 6, 1935, his parents Fred and Amy Lee dudley preceded him in death. A 1952 graduate of Ashdown High School, Fred attended SAU, Magnolia, and U of A, Fayetteville, before entering the Air Force in 1959. Major Dudley dedicated 20 years of his life serving his country. He was a Master Navigator who served in many fighter squadrons and his combat missions highlight his numerous accomplishments. After flying in several planes to include the 101 and F-89, he finished his service as as crewmember on the F4-E. His career in the Air Force helped to fullfill his desire to fly as high and fast as possible. When asked if he missed it, his reponse was always, "Yes." In death, he is once again flying high and fast in heaven. A few of his many honors include the Distinguished Flying Cross w/1DBS, Air Medal w/8 OLC, Republic of Vietnam Campaign Medal, Meritorious Service Medal, National Defense Service Medal, and Vietnam Service Medal w/1DBS. Major Dudley retired in 1979, his family returned to Ashdown where he began a second career working twenty years for Nekoosa/Georgia Pacific. Finally truly retiring to his farm in Red Bluff, he enjoyed hunting, fishing, and spending time with his family. On Sundays and Wednesdays, you could always find him in church. Any other day, try the front porch or the local domino hall. Survivors include his wife of 51 years, Jill Nichole Dudley; five children and their spouses; Brett and Sharon Dudley of San Diego, CA; Mark Dudley, Nichole Dudley, Jason Dudley and girfriend Darlene Turpin, all of Texarkana, and Ashlee & Gabe Stephens of North Little Rock; two sisters and brothers-in-law, Mamie Anne and Dick Atkinson of Houston, TX and Amy Jean and Hoss Redfearn of Ashdown; adoring mother-in-law Lillian Williams of Ashdown, AR, sister-in-law Kaye Glasgow of Richmond, TX; and brother in-law Ken Williams and wife Dissie of Houston, TX. Known as "Papaw" to his 9 beloved grandchildren , Amber, Timothy, Jantzen, Jarrod and wife Carmen, Garrett, Keely, Carson, Avery, and Lilly; 4 great-grandchildren, Carson, Christian, Blakelee and Tristian and "Uncle Boy" to his many nieces and nephews. he was a friend to all . The family would like to thank the medical staff at Dubuis Hospital and St. Michael's ICU. A special thank you to Dr. Vereen, as well as Dr. Bailey and his staff. A celebration of his life and family will be Sunday, February 19th, 2:00 pm at Living Water Church (Calvary Christian Fellowship) Hagan Road in Ashdown. Brother Jason Dudley and Brother Terry Walthall will officiate. Visitaion will be Saturday February 18 from 5 to 7 pm at the church. online registraion: maddenfuneralservice.com

The family of Major Norman Fred Dudley created this Life Tributes page to make it easy to share your memories.

Norman Fred Dudley, 76 ,went home to be with his Lord and Savior...