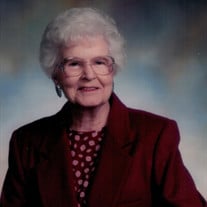 Margaret Eugenia Daniel, renowned educator of Little River County, Arkansas, and loving grandmother, mother and wife, passed away peacefully December 9, 2018 in Stuttgart, AR. Having lived a full life dedicated to family, friendships and enriching the lives of others, she was 98. Born Feb. 18, 1920 in Richmond, AR, to Myrtle Wade and Howell (Pete) Cobb. Margaret graduated from Southern Arkansas University, then known as Magnolia A & M, and completed graduate work at Henderson State University of Arkadelphia. She married Noble Brassfield Daniel Jr June 22, 1940 in Richmond. Margaret began her long teaching career in Richmond. When her husband joined World War II, Mrs. Daniel started teaching at Ashdown Elementary. She lived in a small apartment near the school and waited every morning for the children to pass by to join them on the walk to class. In her 40 years as either a classroom teacher or principal, she became a strong and positive influence on countless students and fellow educators. Among her numerous accolades was being named Arkansas Teacher of the Year in 1976. That was the year of the U.S. Bicentennial and Mrs. Daniel chose to make it memorable for her students. She set up a classroom like a one-room school house with logs for seats, and another room as an antique kitchen with a butter churn. Outside was a barnyard with chickens, goats and a cow, which Mrs. Daniel delighted in milking. She is described by those she mentored as caring, dignified, poised and a true southern lady. The elementary school in Ashdown is named in her honor. Following her retirement, she enjoyed numerous adventures with her husband, traveling in their RV. He preceded her in death in 1997. In 2005, the Ashdown School District established the Margaret Daniel Educational Foundation. Organizers credit her influence with assisting in raising money to fund grants for unique and challenging materials for students as well as professional training for educators. Mrs. Daniel relocated to Stuttgart in 2011. She is survived by her son Dr. Noble Daniel III and wife Whitney of Stuttgart; granddaughter Margaret Scott Daniel Berg and husband Roger and two great-grandsons Tyler and Grayson of Colorado. She was a member of the Ashdown First United Methodist Church; Little River County Retired Teachers Association; honorary member of Delta Kappa Gamma Society International, Gamma Mu Chapter; and Ashdown Senior Citizens Center. She attended First United Methodist Church in Stuttgart, and was involved with Stuttgart retired teachers and the Stuttgart Senior Center. In lieu of flowers, Mrs. Daniel’s memory may be honored by contributions to the Margaret Daniel Primary Educational Foundation, 171 S. Locust, Attn: Kari Harger, Ashdown, AR 71822 or the First United Methodist Church in Ashdown or Stuttgart, or Seniors Centers of Ashdown or Stuttgart. A memorial Service will be held at First United Methodist Church in Ashdown at 2:00 p.m. Sunday, December 16, 2018.

The family of Margaret Daniel created this Life Tributes page to make it easy to share your memories.

Send flowers to the Daniel family.