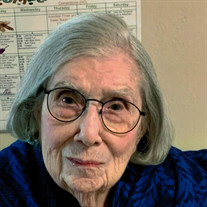 Mary Sue Mills, born November 8, 1919, entered eternal life on Sunday, September 13 th , 2020, shy of her 101 st birthday, in Texarkana, Texas at Cornerstone Retirement Community. Graveside service will be at Ashdown Cemetery, 935 N. Corbin St., 71822 at 10:00 a.m. on Thursday, September 17, 2020. Visitation will be at Madden Funeral Home, 371 N. 3 rd , Ashdown, AR. at 5:00 – 7:00 p.m. on Wednesday, September, 16 th , 2020. Mary Sue, lovingly known as “Sue” assisted many households for over 30 years, providing employment for housekeepers, cooks, and nannies among other professions. Mary Sue worked as an Employment Interviewer for the Arkansas Employment Security Division located in Texarkana, Texas. Her name was a household word to those who could afford to employ home and/or business assistance. She was known for her quick wit, responsible candidate screening, and certain response to the employer. Sue took retirement October 31, 1981, thirty-eight years. Sue’s family opened a clock and watch repair shop December 4, 1904, in Ashdown, Arkansas. Sue’s Dad, John Fredrick Mills, made sure that Sue wore the latest watch piece and knowing the importance of being on time. May 27, 1932, Sue was awarded a “Certificate of Honor” graced with an Arkansas State Flag for two years of perfect school attendance. Her Certificate stated, “she was neither absent nor tardy”, and was signed by not only her teacher but the Ashdown School Superintendent. Sue graduated from Ashdown High School and went on to graduate in 1941 from Arkansas State Teacher’s College (now The University of Central Arkansas in Conway). After teaching for a short time, Sue felt she didn’t really want to be confined to the classroom. Sue along with a friend worked at a chemical plant and were disappointed with the work. World War II broke out in 1943 and a new division of the Navy was organized called the “Waves”. Sue thought that sounded exciting, so she and her friend joined “Women Accepted for Volunteer Emergency Service” (WAVES). At this time a “wave” was more than a greeting to Mary Sue Mills it was a devotion to serving the United States Navy. Waves is also an allusion to ocean waves. The word “emergency” implied the acceptance of women was due to the unusual circumstances of the war. In mid-1943, Mary Sue Mills joined about 27,000 other American women in the WAVES Program. After coming back to Ashdown from World War II, Sue resumed her courtship with her childhood sweetheart, another Mills, Archie. She married Archie Mills in 1960 …stating “I didn’t even have to change my last name”. Sue was a talented artist. She has won numerous awards for her work. She has been active in Little River County Historical Society; she was a charter member of the Little River Arts Council and devoted many hours to bringing the Mid-Summer Art Show to Ashdown. She was generous in that she loaned many one of a kind, vintage pieces for display at the Little River Historical Museum. Although confined to a wheelchair at 100 years of age, Sue still had an eye for art and could “remember when”. Survivors include cousins, Deborah Bailey (Rick) of Fayetteville, AR., Britney Fox (Ryan) of Rogers, AR., Cole Bailey (Natalie) of Fayetteville, Melanie Warder (Rodney) of Siloam Springs, AR., Brooke Fowler (Chris) of Siloam Springs, AR., Todd Puckett of Chicago, IL. Children, Jaxson & Beckett Bailey, Clayton Bailey, Camden Fowler. Mary Ann Clements (Ed) of Ashdown, AR. Special friend and superb caregiver, Gwen Crockett. Memorials may be sent to Two Rivers Museum, P. O. Box 1134, Ashdown, AR. 71822

The family of Mary Sue Mills created this Life Tributes page to make it easy to share your memories.

Send flowers to the Mills family.