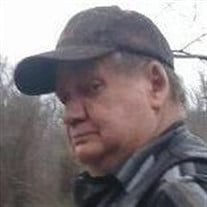 Merle V. Burns, age 82, of Ben Lomond, AR passed away Friday, January 10, 2020 in Hot Springs, AR. Mr. Burns was born May 1, 1937 in the 23rd District of Bald Knob, Arkansas to Domer & May Burns. After 30 years at International Harvester of Indianapolis, IN he retired and moved to Ben Lomond, where he founded the Ben Lomond Social Club and became the top advisor to the Ben Lomond mayor. He was also a Mason. He was an avid fisherman and a friend to everyone he met. He was preceded in death by his wife Aura Burns; son, Michael Burns; daughter, Debbie Armstrong; his brother, Dwight Burns; and his twin sister, Jerry Long. He is survived by his favorite grandson and granddaughter-in-law, Jason and Deidre Lynch of Wilton, AR; his favorite granddaughter, Meryl Napier of Texarkana, AR, and his sister Jean Burns, of Indianapolis, IN. Mr. Burns will be greatly missed by all that knew him, especially his family and friends. Visitation will be held 6 to 8 pm Friday, January 17 at Madden Funeral Home in Ashdown, AR. Graveside services will be 10:00 am Saturday, January 18, 2020 at Ben Lomond Cemetery with Ronnie Smith and Larry Reid officiating. In lieu of flowers, donations can be made to the Ben Lomond Cemetery Fund, PO Box 25, Ben Lomond, AR 71823.

The family of Merle Vann Burns created this Life Tributes page to make it easy to share your memories.

Send flowers to the Burns family.