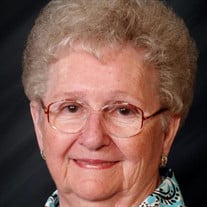 Nellie Lamb Hadaway, 91, passed away August 15, 2020 in Texarkana, Texas. Mrs. Hadaway was born March 30, 1929, in Nathan, Arkansas in Pike County to the late Marion T. Lamb and Nettie Hutchings Lamb. She was preceded in death by her parents; husband, JC Hadaway; one daughter, Sharon Hadaway Butler; one grandson, Jeffery E. Hadaway; one great grandson, Caleb Powell; one great granddaughter Haddy Lynn Hadaway; five sisters, Annaperal Suttles, Minnie White, Ethel Allen, Ruby Walls, and Mildred Austin; and three brothers, Allen Lamb, Jewel Lamb, and Floyd Lamb. Nellie met the love of her life, Jeffery “JC” Hadaway, and they were married on May 27, 1950. They had sixty-four years of marriage before his passing. They enjoyed their time together on this earth creating many wonderful memories. Now they are back together again in Heaven for eternity, never to be separated again. She was a long-time member of the First Baptist Church of Foreman, Arkansas, where she participated in many church functions. Everyone knew that Nellie was the go-to person for that dish needed for potluck, a wedding, or funeral. She was a homemaker until she started work in 1972. Even though she worked full time many years until she retired from Spotlight Manufacturing in Ashdown, Arkansas, she still found time to be a loving Wife, Mother, MeeMaw/Grandma, and Great Meemaw/Great Grandma. Many hours were spent sewing at home with her two daughters, laughing and sewing, having a good time. Family was important to her and holidays were always special. Holiday times were spent with delicious food, fun times and making life long lasting memories with her family. She is survived by two sons and daughter-in-laws, Jamie and Sarah Hadaway of Ashdown, Arkansas and Steve and Kathy Hadaway of Foreman, Arkansas; one daughter and son-in-law, Melanie and Chris Wesson of Queen City, Texas; grandchildren, Matthew and Kristy Hadaway of Foreman, Arkansas; Mark and Kelly McCullough of New Boston, Texas, Adam and Haley Hadaway of Ashdown, Arkansas, Dan and Kaleigh Butler of Redwater, Texas, Nathan Butler of Texarkana, Arkansas, Morgan Butler and Jake Powell of Texarkana, Texas, Sarah Elkins of Fouke, Arkansas, Christopher Wesson of Dillion, Colorado; great grandchildren, Austin and Aubree McCullough, Ryan Miller, Jaycee Lynn Hadaway, Carter and Caylee Powell, River Elkins, Hoyt Butler and Hollynn Hadaway; numerous other relatives. An informal come and go viewing will be at Madden Funeral Home on Tuesday, August 18, 2020, 6-8 pm in Ashdown, Arkansas. Graveside services will be Wednesday, August 19, 2020 at 10 am at Ashdown Memorial Gardens in Ashdown, Arkansas, with Rev. Jim Cross officiating. Face coverings are required at Madden Funeral Home and Ashdown Memorial Gardens.

Nellie Lamb Hadaway, 91, passed away August 15, 2020 in Texarkana, Texas. Mrs. Hadaway was born March 30, 1929, in Nathan, Arkansas in Pike County to the late Marion T. Lamb and Nettie Hutchings Lamb. She was preceded in death by her parents;... View Obituary & Service Information

The family of Nellie Lamb Hadaway created this Life Tributes page to make it easy to share your memories.

Send flowers to the Hadaway family.