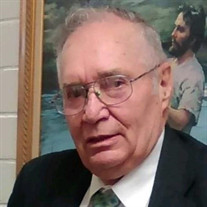 Oliver Talmage Miller, loving husband, Dad & Papaw, peacefully passed away on January 26, 2020 in Ashdown, AR, surrounded by his loving family. Oliver T., or Talmage, as he was known by most, was born on September 19, 1936 to Paul Gaines & Rita Scott Miller in Pomerene, AZ, the seventh of their fourteen children. When Talmage was about 7 years old, he, along with his parents and 10 siblings moved to Winthrop, AR. Three more siblings would be later born to the family. He graduated from Winthrop High School in 1954. In the late 1950s, he joined the United States Air Force, and remained until he was medically discharged. While stationed at Barksdale Air Force Base, he met Barbara Jean Davis, and they were married on May 3, 1963 in Shreveport, LA. 13 months later, a son, Michael Talmage, was born in June 6, 1964, but sadly, he passed away at 3 days old. Shortly after that, Talmage & Barbara moved to Hooks, TX, where he started working at Red River Army Depot. Four more children were born in this union- Oliver Shawn, Christian Shane, Melissa Michele (Shelly) and Jon Stacy. Talmage retired from RRAD in 1987. He and Barbara then started raising chickens for Tyson, and continued to do so until retiring all together in 2010. Talmage loved his Savior & Lord, Jesus Christ, and was quick to tell everyone he met about Him. He never met a stranger. Talmage had a dry sense of humor, and told many jokes over and over again, even if he missed the punch line or if it didn’t make sense. He always loved having his grandchildren nearby, especially his Joseph, who helped him collect many rocks, and who would go to the chicken houses with him to help him. Joseph was his main man, even if he is only 13 years old. Talmage will be missed by all who were blessed to know him. He is survived by the love of his life for almost 57 years, the one he always called dearest, Barbara Jean; his children, Shawn (Heidi), Shane (Mary), Shelly (Carl) Ricks, and Jon (Carrie); his grandchildren, Andrew (Laila), Todd (Alli), Joshua (Amanda), Kendall (Eric) Matson, Lauren (Shawn) Ison, Kayley (Zach) Batis, MaKayla, Jacob, Kristen, Lindsey and Joseph; 4 Great-grandsons, Jaxson, Rule, Rowdy & Jonah, and 1 Great-granddaughter, Aliyah, with 2 more GREATS due this year; siblings, Vernon, Ethel, Ann (Norman), Melvin (Betty), Irene (Glen), Joseph (Judy) & Mary Lynn (Greg), and numerous nephews & nieces. Talmage is preceded in death by his parents & siblings, Pearl, David, Laura, Winifred, Stanley & Ronald, and by his son, Michael, who he never forgot, and we are sure met Dad with open arms, and said “the name’s Miller.” Funeral services will be Saturday, February 1 at 1:00 pm at The Church of Jesus Christ of Latter-day Saints on Moores Lane in Texakana, TX. Viewings will be Friday, January 31 from 6:00 to 8:00 pm at the Madden Funeral Home in Ashdown, AR, and Saturday at 12:15 pm prior to the funeral. All family and friends are invited to attend the funeral, but we want it to be a celebration of life! All are encouraged, when indicated, to tell a short story on how Talmage inspired or helped you, or just something good. Please keep it under 3 minutes.

Oliver Talmage Miller, loving husband, Dad & Papaw, peacefully passed away on January 26, 2020 in Ashdown, AR, surrounded by his loving family. Oliver T., or Talmage, as he was known by most, was born on September 19, 1936 to Paul Gaines & Rita... View Obituary & Service Information

The family of Oliver Talmage Miller created this Life Tributes page to make it easy to share your memories.

Send flowers to the Miller family.