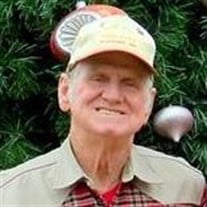 Randell Glenn Carrell (69) of Foreman, AR passed away on December 4, 2018 in Texarkana, TX after a long battle with illness. Randell was born on October 27, 1949 in Kingston Springs, TN to Harvey and Georgia (Bennett) Carrell. He was the twelfth of fourteen children. On December 14, 1968, Randell married Jane Grace in Enid, OK, with whom he spent almost fifty years of love. Shortly after their wedding, Randell served in the U.S. Army from 1969-1971 during the Vietnam Conflict. Throughout his life, Randell held a variety of jobs, but he found his calling as a log truck driver. Known to many as “Little John,” his CB handle, Randell was well-known and much loved in the logging community. Family was always a priority for Randell. He could always be counted on to be at any activity in which his children or grandchildren participated, even serving as Scout Master and a Little League coach for his sons. Randell was an avid hunter and loved to sing karaoke, particularly Merle Haggard songs. Randell is survived by his wife Jane of Foreman, AR; daughter, Cyndie (Johnnie) Johnson; son, Stacy Todd (Melinda) Carrell of Foreman, AR; and grandchildren Kyelle (Eric) Duncan of Texarkana, TX; Daniel Millwood of Texarkana, TX; Paige Johnson of Little Rock, AR; Palmar Johnson of Texarkana, TX; Randy Carrell of Foreman, AR; Blaine Johnson of Texarkana, TX; and Hunter Carrell of Foreman, AR. He also leaves behind brother-in-law, Clyde Dennis of Nashville, TN; sister, Mary Nelle Owens of Cleveland, VA; brother, Jack (Christine) Carrell of Clarksville, TX; sister, Patricia Shipman of Eufaula, OK; brother, Kenneth (Mildred) Carrell of Clarksville, TX; sister, Darlene (CL) Friend of San Antonio, TX as well as many nieces, nephews, cousins and friends. He is preceded in death by his son, Randy Carrell, his parents, Harvey and Georgia Carrell, brothers Nolan, Bobby and James (Buster) and sisters Vada, Marie, Gracie, Sharon and Julie. Visitation will be at Madden Funeral Home in Foreman, AR on Friday, December 7 from 6-8 pm. Services will take place on Saturday, December 8 at First Southern Baptist Church of Crossroads at 10 am, with graveside to follow at New Haven Cemetery in Dimple, TX.

Randell Glenn Carrell (69) of Foreman, AR passed away on December 4, 2018 in Texarkana, TX after a long battle with illness. Randell was born on October 27, 1949 in Kingston Springs, TN to Harvey and Georgia (Bennett) Carrell. He was the... View Obituary & Service Information

The family of Randell Glenn Carrell created this Life Tributes page to make it easy to share your memories.

Randell Glenn Carrell (69) of Foreman, AR passed away on December...

Send flowers to the Carrell family.