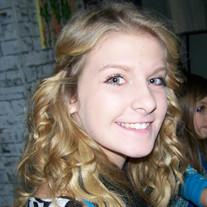 Jesus called Rebecca Jean Summers home on January 12, 2021 following a hard-fought battle with Glioblastoma Multiforme Cancer. Rebecca was born on August 27, 1999, the baby of six children. Rebecca spent her school career as a Foreman Gator, James Bowie Pirate and graduated in 2018 as a Belle Fourche Bronc. Rebecca’s competitiveness and determined personality came out in any athletic endeavors. She was an exceptional softball player- you did not attempt to steal second base when Rebecca was playing behind the plate. You were going to be thrown out for sure! She was a strong competitor on the basketball court and always ready to take the clutch shots. Rebecca had a love for all animals and spent significant energy building her strong persuasion skills trying to talk everyone into letting her get “another” dog. Rebecca lived her life standing up for what she wanted and what she believed in. Rebecca’s greatest life’s work was delivering a beautiful, red-headed baby boy in January 2020. In her last year, she was focused on being the best momma for her son, Waylon, and waging the fight of her life against cancer. She will be remembered as our bold and strong-willed daughter, sister and momma. Rebecca is survived by her son, Waylon Thomas Summers. Her parents Randy Summers & Meleony Stone and Michelle & David Spry. Her grandpa, Wayne Adcock. Her Siblings, Kristi & John Attaway, Kayla & Ryan Grams, Michael & Ashley Adcock, Brandi Hubbard and Calvin Summers & Morgan Murchison. Six nephews: Dylan, Noah, Brandon, Jesse, Jace and Jaxton and six nieces: Deja, Paige, Londyn, Callie, Brentlee, and Josie. Three Bonus Brothers and their families: Justin & Lyndsey Spry, Jacob and Katie Spry and Jared Spry and Kylee Rae Wyatt. She was preceded in death and will join in heaven, her grandparents, Bethal Adcock, B.C. and Patsy Bedsole and Bobby Summers. The family requests that in lieu of flowers, a memorial trust has been set up at Red River Federal Credit Union to benefit Waylon (Acct – 811712). Visitation – Madden Funeral Chapel – Foreman AR– Friday, January 15 - 5:00-7:00 PM Funeral - Madden Funeral Chapel – Foreman AR – Saturday, January 16 - 2:00PM Interment to follow at Marvin Cemetery.

The family of Rebecca Jean Summers created this Life Tributes page to make it easy to share your memories.

Send flowers to the Summers family.