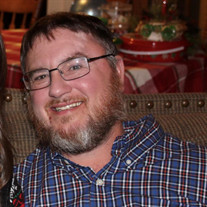 Richard Sheldon Beasley, 51, of Foreman, AR passed away Monday, November 8, 2021 at his home. He was born August 1, 1970 in Ashdown, AR to Bruce Beasley and Cindy (Priest) Ross. Mr. Beasley was a member of First Baptist Church of Foreman, AR. Everyone who knew Richard knew that he was an extremely kind, loving and dedicated father, son, brother and friend. His family meant more to him than anything else in the world, something he proudly and often mentioned. He was endlessly proud of his three children, Connor, Caroline and Callie. They were the center beam of his life and he gave everything a father could give. His dedication and integrity to those he loved was unwavering. He is preceded in death by his father, Bruce Beasley and one son, Connor Beasley. Survivors include his mother and step-father, Cindy and Butch Ross of Foreman, two daughters, Caroline and Callie Beasley, both of Foreman, one brother, Zach Ross of Foreman, five sisters, Stacey Beasley of Foreman, Jennifer Ingalls of Illinois, Amber Gauldin of Foreman, Michelle Johnson of Foreman and Jessica Savage of Illinois. Visitation will be Thursday, November 11, 2021 from 6:00 - 8:00 at Madden Funeral Home in Ashdown. Funeral services will be Friday, November 12, 2021 at 10:00 at the Madden Funeral Home in Ashdown with Gary Steiner officiating. Interment to follow at Gravelly Cemetery in Foreman. Richard had a gift of making anyone feel like family. He constantly made it a point to provide for others in any way that he could and was always a source of positivity. He was never hesitant to lend a helping hand to anyone that asked. Richard truly believed that if you put good out into the world, eventually the good would come back to you. He lived by that every day. He is so very loved and will be dearly missed by all who knew him, his smile and laugh will live on forever.

Richard Sheldon Beasley, 51, of Foreman, AR passed away Monday, November 8, 2021 at his home. He was born August 1, 1970 in Ashdown, AR to Bruce Beasley and Cindy (Priest) Ross. Mr. Beasley was a member of First Baptist Church of Foreman, AR.... View Obituary & Service Information

The family of Richard Sheldon Beasley created this Life Tributes page to make it easy to share your memories.

Send flowers to the Beasley family.