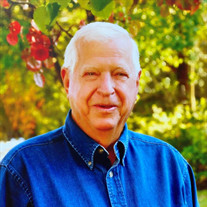 Robert Troup (Bob) Furlow passed away on Friday, April 2, 2021, at the age of 86. Bob was born on September 8, 1934 in Ashdown, Arkansas. He was preceded in death by his loving mother, Bama Moon Furlow, and his four sisters, Ruby Lee Harris, Betty Needham, Mary Dell Furlow, Lena Moon Stover, and two nieces, Lena Ann Sisk, and Jan Needham Price. Left to cherish his memory is wife of 61 years, Sandra Shackelford Furlow, two daughters, Julie Furlow, her partner, Jan Wilson, Sherry and husband, Glenn Grimes, and two grandchildren, Cole and Colyn Grimes all of Ogden. Bob grew up in Ashdown, Arkansas and graduated from Ashdown High School in 1952. He served for two years in the U.S. Army, most of the time in Japan. He retired from General Telephone Company in 1992 after a forty- year career where he met many lifelong friends. Bob enjoyed volunteering in the community. He was a loyal member of the Texarkana Noon Lions Club for thirty-eight years where he served as President and District Governor. He was a champion for the under privileged, always fighting for those in need. Bob served on the Quorum Court of Little River County as Justice of the Peace for twenty-five years and the Ogden City Council for many years. He also served on the Little River Rural Development Association Board. He was an active member of the Ogden Volunteer Fire Department and the Ogden United Methodist Church. Bob lived a life of loyalty and service. Fiercely loyal to his family and friends and happily serving in his community, he loved people. Bob loved the outdoors, hunting fishing, and gardening. He was a great storyteller, never forgot a thing, and could recite names, dates, and events with accuracy. He often told some of the same stories and Cole and Colyn numbered them! No doubt Bob is in heaven telling some great stories. Sunday lunch with family was one of his most cherished times; as well as drinking coffee each morning with Sandra, Julie and Sherry, which they called the board meeting! In lieu of flowers, memorials may be made to the Ogden United Methodist Church, P.O. Box 158, Ogden, Arkansas 71853 or the Texarkana Noon Lions Club, P.O. Box 7523, Texarkana, TX 75505. Visitation will be Monday, April 5, from 5:00-7:00 at Madden Funeral Home in Ashdown, Arkansas and services at Madden Funeral Home at 10:00 Tuesday, April 6th, with burial following at East Memorial Gardens in Texarkana, Arkansas. Jay Stephen Simpson will be officiating. Pallbearers will be his nephews, David, Philip, and Gary Stover, Ricky Needham, Billy Sisk, Clinton (Peanut) Sturdevant, and close family friends, Patrick Morrison and Ricky Ward.

Robert Troup (Bob) Furlow passed away on Friday, April 2, 2021, at the age of 86. Bob was born on September 8, 1934 in Ashdown, Arkansas. He was preceded in death by his loving mother, Bama Moon Furlow, and his four sisters, Ruby Lee Harris,... View Obituary & Service Information

The family of Robert Troup Furlow created this Life Tributes page to make it easy to share your memories.

Send flowers to the Furlow family.