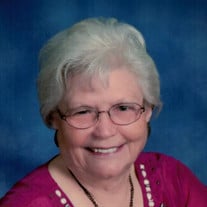 Ruby Karla (K-K) Hinton Kolbachinski Priest passed from her earthly home to her heavenly home on January 16, 2019 at the young age of 87. K-K was born on September 20, 1931 to Altus C and Sarah Tyson Hinton. She was the eldest of four children born to this union. Sarah was killed by lightening in 1939. Altus married Louise Gantt who became the second mother to the Hinton Children. K-K was very involved in the Lions Club before moving back to Ashdown, where she became involved in the local Lions Club. In 2002 – 2003, she was chosen by her peers as Lion of the year. K-K loved her church and was Lay Member to the annual Arkansas State Conference. While living in Chandler, she was chosen to edit three of the church’s pictorial directories. In Ashdown, she chaired the committee for the directory and helped on another. She was a member of the Joy Sunday School Class. For many years, she served as Secretary/Treasurer for the Little River County Historical Society. When she had to retire, after suffering a stroke and later losing her eyesight, K-K was presented with a prestigious plaque honoring her many years of service. She served on the Little River County Election Commission for ten years. K-K is a charter member of the Little River Arts Council, serving several years as Secretary/Treasurer (and she was not an artist – they just found out she took good notes). Before losing her eyesight, K-K was an avid reader and loved to travel. K-K was preceded in death by her first husband, Arnold Kolbachinski, her second husband, J. D-Eon Priest, her parents, her sister, Claudia Arnold, two brothers, Billy Carl Hinton and Louis Edward Hinton K-K is survived by one daughter, Sara Kay Lauter and husband, David, one son, Arnold Ray Kolbachinsi Jr. and D-Eon’s daughters, Denise Deutsch and husband, Jerry and D-Ann Gilmore and husband Larry, one sister-in-law, Euta Hinton, five grandchildren, Kortenay Thompson and husband Jeff, David Lauter Jr. and fiancé Chelsey Lange, Kaston Kusler and husband Dean, Molly Kolbachinski and Josh Kolbachinski, three great-grandchildren, Zane Thompson, Cailen Thompson and Holly Kolbachinski as well as many other relatives, church family and friends. In lieu of flowers, K-K requested contributions made to Ashdown First United Methodist Church 145 E Commerce Ashdown, AR 71822, Little River County Historical Society P O Box 1134 Ashdown, AR 71822, Little River Arts Council P O Box 833 Ashdown, AR 71822 or to your favorite charity. Visitation will be Friday, January 18, 2019 from 6:00 – 8:00 at Madden Funeral Home of Ashdown. Services will be Saturday, January 19, 2019 at 2:00 at First United Methodist Church of Ashdown with Bro. Jim Cross officiating. Interment to follow at Wilton Cemetery.

Ruby Karla (K-K) Hinton Kolbachinski Priest passed from her earthly home to her heavenly home on January 16, 2019 at the young age of 87. K-K was born on September 20, 1931 to Altus C and Sarah Tyson Hinton. She was the eldest of four children... View Obituary & Service Information

The family of Ruby Karla K-K Priest created this Life Tributes page to make it easy to share your memories.

Send flowers to the Priest family.