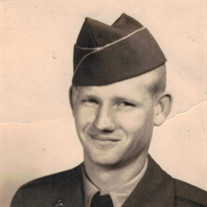 Mr. Williams age 87, resident of Winthrop, AR passed away Friday March 6th 2020 at St. Michaels Hospital in Texarkana. Mr. Williams was born August 19, 1932. He was born to Arthur and May Williams in Winthrop, AR. He was the youngest of 7 children. He was proceeded in death by his parents and all his siblings, his wife Peggy Williams, 2nd wife Francis Williams, daughter Sherry Horn, granddaughter Janie Nevels, great grandson Dalton Jaquess. Sonny was a Private in the U.S. Army, he was a member of the First Baptist Church of Winthrop and retired from Ash Grove Cement Plant. Sonny is survived by his son Larry and Donna Williams of New Boston. His daughter Kim and Duane Ivey of Winthrop. Son-in-law Andy Horn of Texarkana, AR. Grandchildren Caleb Horn of Colorado, Sheree and Clint Hardin of Texarkana, Kelly and Chad Turner of Texarkana, Jake and Ashlee Williams of Texarkana, Sunnie and Chris Sherman of Hooks, Tyler Iveyand Dylan Akins of Winthrop, Lucas Williams of New Boston. Great grandchildren Carson and Lanie Horn of Ashdown, Devin and Tyler Neal of Texarkana, Collin Evans of Texarkana, Jaycee Jaquess of Texarkana, Kyler, Hadlee, and Addi Sherman, Sylas Akins, Marius Williams of Texarkana, and one great great grandson Rocket Neal. Three bonus children Ron and Katherine Jackson of Texarkana, Reg and Jeanie Jackson of Ashdown, and Becky and Rusty Cowling of Ashdown. And many cousins, nephews, nieces, and so so many friends. As well as our special new family at Pine Crest Assisted Living in Ashdown. Visitation will be at Madden Funeral Home in Ashdown AR Monday March 9th from 5-7 pm. Graveside service will be held at Campground Cemetery under the direction of Madden Funeral Home in Winthrop Tuesday March 10th at 10:30 am.

Mr. Williams age 87, resident of Winthrop, AR passed away Friday March 6th 2020 at St. Michaels Hospital in Texarkana. Mr. Williams was born August 19, 1932. He was born to Arthur and May Williams in Winthrop, AR. He was the youngest of 7... View Obituary & Service Information

The family of Mr. Thomas (Sonny) A. Williams created this Life Tributes page to make it easy to share your memories.

Send flowers to the Williams family.